Microsoft Will Not Be Harmed By The TikTok Operation

The computer giant does not appear to be going through its best moment in the face of market corrections that have led it to lose positions since the beginning of September.

However, experts believe that factors such as staying out of the TikTok business will not penalize you while they value the dividend increase.

Experts consider that the entry into the capital of the controversial Chinese social network in the United States would have added complexity to Microsoft’s business, despite the fact that the firm that Bill Gates created has already entered the acquisitions segment since the arrival Satya Sadella at the head of the group. This is the case of the acquisitions of Linkedin, Mojang AB and GitHub and the last one the 7.500 million dollars that will pay for ZeniMax Media and its game publisher Bethesda Softworks.

Now he seems to focus on raising his dividend to 56 cents, which he will pay on December 10 and which means, as the experts predicted given the increase in his income, an increase of 10%. An increase that analysts think should serve to attract investors more conservative in value, although the rest are used to it because shareholder rewards have been common at Microsoft since 2003.

If we look at its stock chart in the last five days, it loses 1.8%, 3.73% in the past month, rises slightly more than 2% in the quarter, but recovers 67% every six months to add in year 47%. Of course, the falls of the last month have led Microsoft from levels at which it traded 40 times its profits to reduce its price and leave it at 35 times its price. 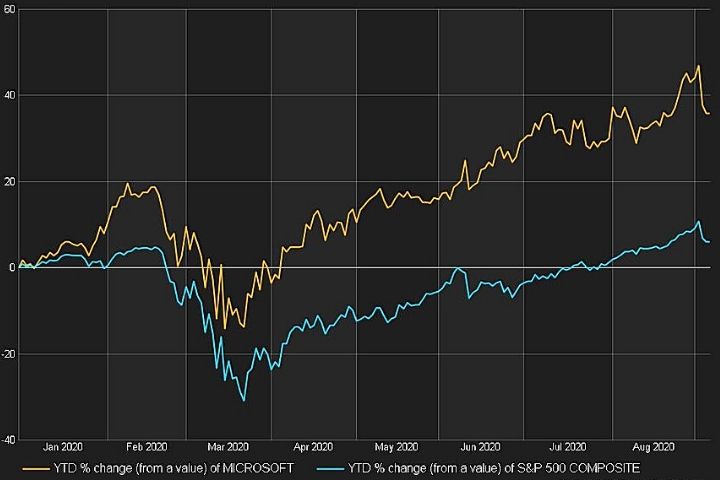 Regarding recommendations, from Morgan Stanley, its analyst Keith Weiss places the target price of its shares at 245 dollars from the previous 230 and considers that the technology giant has raised its quarterly dividend guaranteed by the increase of 13% in its income to the 38,000 million dollars. He also maintains his advice to overweight the stock.

Bank of America reaffirms its purchase rating on the security with a price target of $ 230 and Wedbush raises its PO to $ 260 from the previous $ 220, overweighting the security. While the market consensus collected by TipRanks on the analysis of 29 experts recommends strong purchase on the value with a target price of $ 230.14 and a potential of 12.3%.

While Mizuho raises the target price to $ 240 per share due to the improvement in the trend of its demand for cloud computing, Azure believes that its success will be greater in the medium and long term. And it also places the emphasis above all on the monetization of Microsoft 365 / Office 365.

Of course, not all are congratulations because, in the face of the recent falls, Barclays leaves its recommendation in neutral, understanding that the valuations of technology stocks are approaching extreme levels that were only seen for the last time during the dotcom bubble 20 years ago. And they are reluctant, they say, to pursue an advance on them by paying above the high multiples of the market.

According to our premium indicators Microsoft reaches a level of 9 points out of 10 possible. It presents a medium and long-term upward trend, total slow and fast positive moment, long and medium-term volume increasing and on the negative side, the range of amplitude of the value stands out, its volatility, which continues to rise, with increasing levels both in the medium as long term.

What Is Email Hosting And Why Should You Think About Using It For Your Business?

How To Solve Audible Problems

Difference Between “Desktop/NAS/Surveillance/Enterprise” Hard Drive. Quick Guide To Choose A Suitable Hard Drive According To Your Needs