This Is How Magnetic Levitation Fans For PC Work

PC fans are as necessary as they are problematic, since they do not withstand the passage of time very well and with this many problems arise. If we talk about fans of a few euros, replacing the damaged one with a new one is not a problem for the pocket, but a premium fan that costs 5 times more… It hurts. Not to mention the problems of noise and traffic jams they suffer, so that is why manufacturers after decades of R&D designed magnetic levitation systems, but how do they work?

Putting time and wear aside for a fan, right out of the box and just bought, all common fans suffer from the same problems, whether to a greater or lesser extent. Friction, noise, and calibration defects, among many other issues that make experience and performance a nightmare on certain models.

Fans For PC, A Constant R&D That Does Not Stop

The problem with any common fan is precisely the physical wear suffered by the shaft and the rotor, the latter both inside and outside. In the first PC models, reliability was sought before loudness or performance, basically the fan should not fail, which increased the price of the product, but many of us gladly paid for it.

There was no aesthetics, lights or the like, a crude injected ABS plastic fan in black with 3 pins for its control and RPM reading in the best of cases, but a 12 volt molex connector and little else.

Anyone who owned premium fans in the 80s and 90s will know the lifespan was high, but compared to current technologies it wasn’t very there. The bearings were not FDB in most models and maintenance had to be done every few months due to friction and microparticles.

These created annoying noises and oscillations in the fan that, seen from the edge, made the shaft and blades protrude from the frame. So how to fix this? The hard drive industry’s direct fluid bearings and their most advanced turntable systems arrived and everything got better. The metallic noise was slowed down and abated, it was much more pleasant, durability skyrocketed and the system evolved with fluid directing channels to redirect fluid and improve the temperature and friction of the walls and rotor.

Since then, there have been significant advances, but none have really solved the problem, until the magnetic levitation fans arrived. 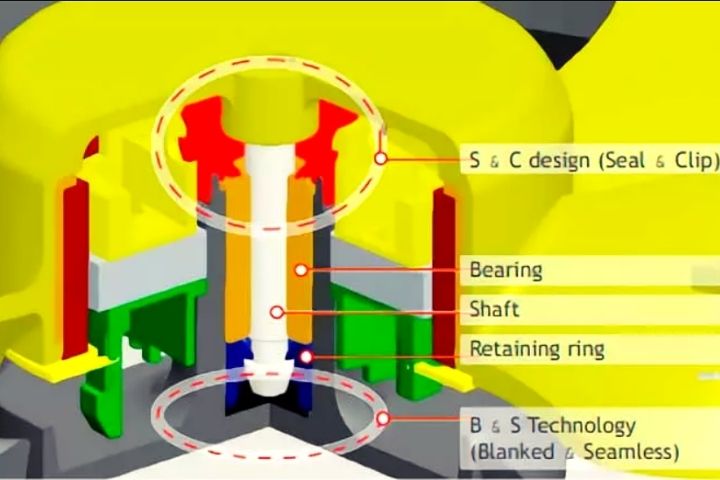 From the so-called Sleeve Bearing to the Ball Bearing, going through all the existing bearing subtypes and none of them can solve the problems due to a lot of torsional rigidity or anchoring the fan has. Why? Mainly due to the magnetic and conventional rotor system of the fans, in short, due to its concept and implementation.

In a normal fan the stator is positioned so that the body of the fan blades integrates a magnetic edge that makes the center of gravity horizontal. Logically, the force of gravity has its effect, no matter how slight it may be and although the stator has four motors around the rotor, this creates blind spots of magnetism between them that implies a very slight deviation of the axis, whether the fan is horizontal or vertical. .

To this must be added the degradation of the rotor itself due to being in contact with another body, even though it is lubricated, which results in everything working correctly at the beginning of the fan’s useful life, but over the years and use the fan is off center and to repair it, the only thing left to do is replace the complete rotor with its washers, liquid or oil or compound.

Magnetic levitation in PC fans avoids this, since the center of gravity of the magnetic field is vertical by one or more magnetic magnets, so the fan is fully calibrated at all times. This allows the rotor to always be aligned and to suffer the “same wear” everywhere symmetrically, always achieving the least friction and therefore the least noise ( there is really no wear as such beyond contact with the air).

In addition, as a general rule, magnetic levitation systems avoid the accumulation of dust on the walls of the motor and, if that were not enough, since there is less friction and more stability in the rotor, the temperature generated is lower, achieving less expansion between the parts and thus more overall durability.

Another aspect to take into account is that as the thrust and attraction between the magnets is vertical, an attraction is produced in the same direction that allows the impeller rotor to reach the end of the shaft. The distance is so small and the adjustment so perfect that the weight of the rotor itself with the motor and the blades is totally neutralized , even if the fan is installed vertically.

Therefore, the shaft rotates freely without being affected by gravity, which improves everything said above. In other words, the bearing and the shaft maintain a constant distance in time without actually touching, rotating in an orbit if not perfect, almost perfect, which eliminates any vibration produced by the rotation since there is no physical contact at any point.

Therefore, we are facing a system that directly eliminates the noise from the rotor and the motor, leaving everything in the hands of the fluid aerodynamics of the blades, the fan frame or the revolutions that it can reach in turn, since that there we will have a palpable difference in performance and loudness between fans.

This system is relatively new and only a few companies dare to use it due to the high costs involved, since it is focused on either high performance fans or high durability at low RPM and 24/7 operation. For this reason they are expensive and normally the average user does not choose to spend 20 or 30 euros per unit, but in the long run it is a guarantee of performance and peace of mind.